Here are a couple older Bowmans that I was able to get signed TTM from John Curtice.  As usual, the foil and chrome versions didn't scan too well, but the cards look nice.  Take my word for it. 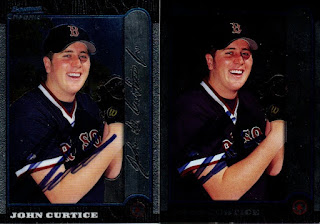 I mailed to Curtice on October 13 and got the cards back on December 24, for a 72-day TAT.

Posted by William Regenthal at 4:46 PM