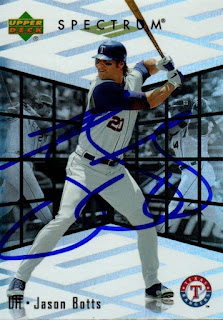 These Jason Botts cards hung out in my boxes for a super long time.  Way back when I got back into collecting, which was around 2005, I used to pull all rookie cards and drop them in a box.  Years later, I'd go through the box and pull guys who were doing pretty well (this helped me save a couple Trout rookies at the time, the Topps Update got sold immediately, pretty dumb of me) and the rest would just kind of stay in that box forever.  The above 2007 UD Spectrum, while not a rookie, found its way into that box. 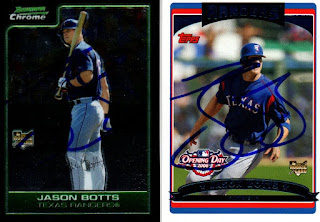 The above 2006 Bowman Chrome and 2006 Topps Opening Day also were held in the rookies box.  I kept seeing the cards during searches through the box and I finally saw that I could try to get Botts to sign TTM.  The cards came back after being out for quite a while, and all of them look great.

Posted by William Regenthal at 7:14 PM