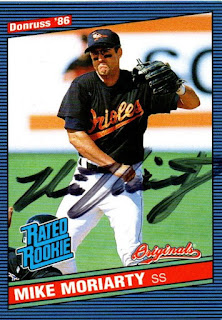 Mike Moriarty is an Oriole that I had completely forgotten about.  Nothing against him, but I was still in college during the era in which he played, and don't remember much from those lost seasons.  When I found this card in my box that I got from my good friend, Max, I checked to see if I could get it signed TTM.  I was able to, and the card turned out ok.  I wish Moriarty had used a better marker, but the card is still signed, and will have a spot in my album.

I mailed to Moriarty on October 19 and got the card back on November 13, for a 25-day TAT.

Posted by William Regenthal at 8:43 PM