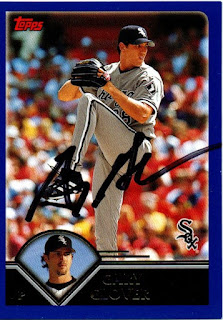 A 2003 Topps card (along with the partial factory set) was rescued from the dumpster at my former LCS right before it closed.  I was able to transfer this card from the partial set to my autograph album since I received it back signed TTM from Gary Glover.

Posted by William Regenthal at 6:31 PM