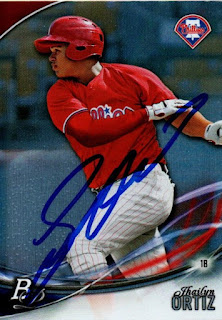 Slowly, I am catching up on my 50/50s from this past summer and filing cards into my album.  I spent a good part of today going through a box I had by my side with a bunch of stuff I wanted to post.  I wanted to make sense of what was in there, and try to get some stuff moved along.
This 50/50 was with a fellow Instagrammer named Jack, who hit me up and asked if I could help him out with cards from some Phillies and Blue Jays minor league teams.  I was able to move out a bunch of cards, and get some decent stuff back, like the above 2016 Bowman Platinum Jhailyn Ortiz.  This card came from a bunch of packs my mom got me for Christmas, so it was cool to be able to get at least one of the cards signed. 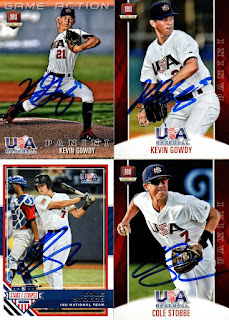 I was also able to move some of these Team USA cards that were in the boxes that came from my former LCS.  I had a bunch of Cole Stobbe and Kevin Gowdy cards, and was happy to send them along. 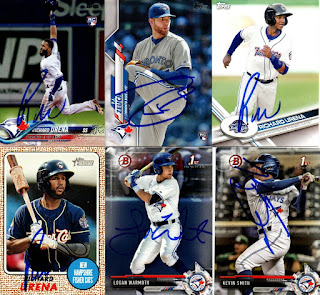 It is always a good time when I can continue to thin out my 2017 cards; the first period of minor league stuff that I bought into heavily.  I have not renewed my boxes of 2017 Pro Debut or 2017 Heritage Minors, instead opting to let the stacks dwindle down to make room for more recent stuff. 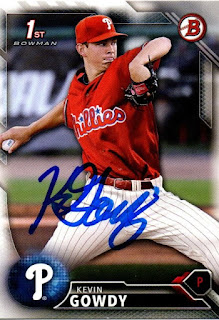 I was glad that Jack was able to get me some Kevin Gowdy cards signed.  Gowdy actually showed up on the Down East Wood Ducks roster for a bit, but didn't appear in Kinston at all.  I ordered Gowdy cards, anyway, but ended up having to box those, since he never came here.  I think his placement on the roster was a procedural move, or maybe he was here while I was out of town.  I don't remember.

Posted by William Regenthal at 10:23 PM