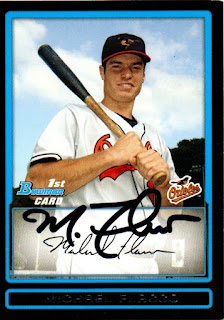 Michael Flacco, the brother of former Ravens (now Jets) quarterback, Joe Flacco, was a former Orioles farmhand at one point.  I had forgotten about this, until I went through my Orioles box recently.  I looked (Michael) Flacco up, and figured I would try and see if I could get a couple of my cards signed TTM.  I turned out to be successful, which was really cool, and the cards look nice. 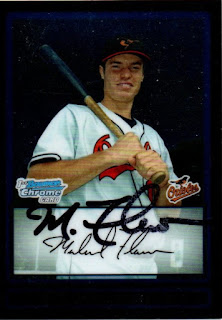 The cards are 2009 Bowman Draft Picks and Prospects cards, of which I didn't open many.  Still, it was nice to add these to the album.

I mailed to Flacco on October 14 and got the cards back on November 4, for a 21-day TAT.

Posted by William Regenthal at 9:29 PM