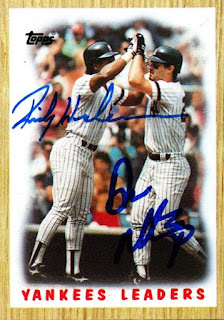 This 1987 Topps Yankees Leaders card was a tough one to complete.  I mailed out three of them at different times to Don Mattingly, and never got one back.  I finally paid for a private signing with him and got the card signed, hoping I would, then, be able to get Rickey at the National.  Rickey wasn't at the National this year, so I had to settle for a private signing, but that's alright.  I have met Rickey twice, once getting him on a ball, and the second time, I got him on the base 87 card.  Now, I can focus on others at the National, if guys I need show up.

Posted by William Regenthal at 11:27 AM