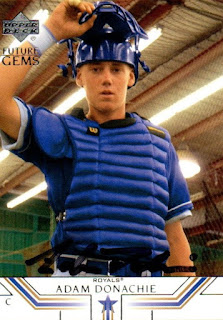 Adam Donachie is a guy who I remember was in the Orioles system a while ago.  I found one of his cards in a box recently, and was curious to see if he signed TTM.  He hadn't signed in years, so I worked my magic in finding an address, and it turned out to be a good one.  I included the 2002 Bowman shown below, and Donachie was nice enough to send me the above 2002 Upper Deck that he signed, and also an unsigned Somerset Patriots team set card (not shown). 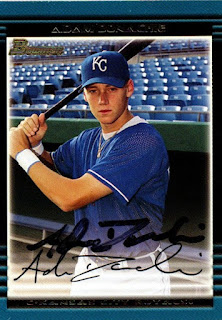 I mailed to Donachie on November 23 and got the cards back on December 2, for a 9-day TAT.  This is the first time in forever that I have been able to blog TTMs within the same month in which I received them.  I'm getting caught up, which is kind of weird.

Posted by William Regenthal at 5:58 PM