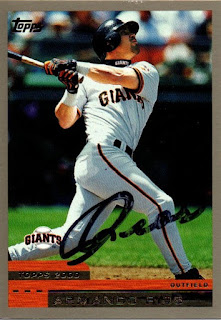 Here are a few nice early 2000s cards that I was able to clear out of my boxes with this TTM success from Armando Rios.  I actually sent these in too quickly, as I had found them and wrote to Rios right after, forgetting that I had put a couple other cards of his aside earlier in the year.  So, I missed those cards, and I will have to send to him again.  Still, what I got signed turned out well, and I was able to add a 2000 Topps to the album, since I don't have many in the autograph album. 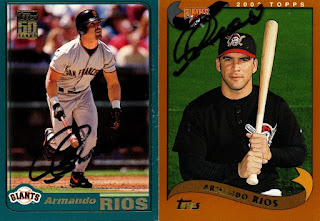 I mailed to Rios on September 11 and got the cards back on November 5, for a 54-day TAT.