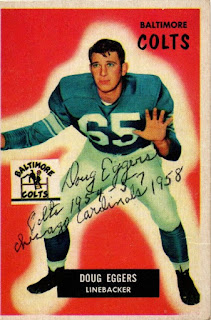 At the last card show I went to, I picked up a couple nice 1955 Bowman football cards that my friend, Wes, was selling.  I got the cards so I could add a couple nice, vintage football cards to the autograph album.  This one was the first (and right now, only) one to come back, from Doug Eggers.

I mailed to Eggers on December 13 and got the card back signed on December 21, for an 8-day TAT.