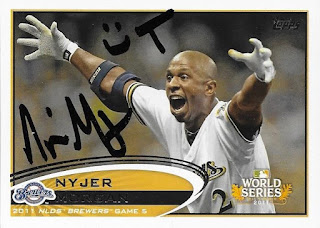 I had to google Nyjer Morgan T inscription.  I had no clue what it meant, but apparently, it is because he used to make a T when he reached base and referred to himself as Tony Plush, which he refers to as his name on the field.  Interesting.  I also like the smiley face inscription.  I got three nice cards back from Morgan via TTM recently, and they all look really cool.  The above 2012 Topps turned out really well, and fits Morgan, I think. 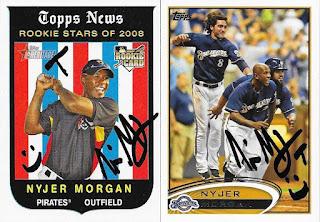 I mailed to Morgan on November 12 and got the cards back on December 7, for a 25-day TAT.

Posted by William Regenthal at 1:18 AM