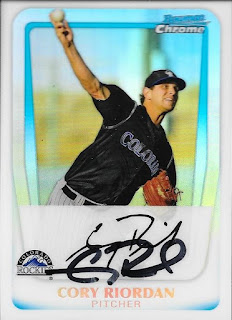 I got a couple older Bowman Chromes out of my box when I got these two cards signed by former pitcher, Cory Riordan.  The above card is a 2011 Bowman Chrome refractor, and the card below is the base chrome version. 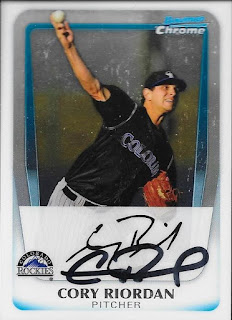 Riordan (b. 1986) was a 6th round pick in the 2007 June Amateur Draft by the Rockies out of Fordham University.  He pitched professionally in the minors, independent and several foreign leagues from 2007 to 2019 amassing an overall record of 93-99 with 1,299 strike outs and a 4.93 ERA.  For him to pitch as long as he did in those leagues shows he was committed to playing the game.  In the minors, he reached the AAA level in the Rockies and Tigers systems.
I mailed to Riordan on November 16 and got the cards back on December 3, for a 17-day TAT.
Posted by William Regenthal at 6:05 PM