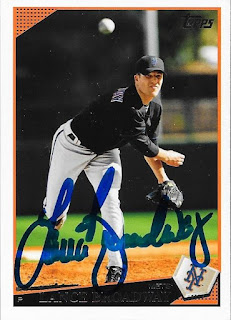 I got some nice cards back signed TTM from former pitcher, Lance Broadway.  I really liked the above 2009 Topps Update.  I wish I had kept all of my 09 bulk, but I had let it all go at a card show years ago in order to make room in my boxes.  Making room is great, but I do like to have options to choose from when looking for cards to get signed. 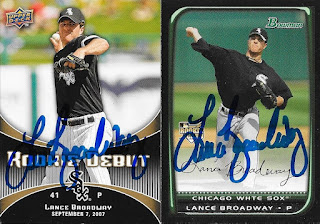 I also sent off a 2008 Upper Deck Rookie Debut (left) and a 2008 Bowman.  Both of these really look great when signed.

I mailed to Broadway on November 16 and got the cards back on December 4, for an 18-day TAT.

Posted by William Regenthal at 11:02 PM