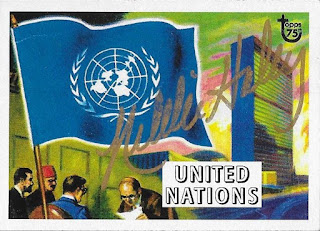 I do not enjoy engaging in political discussions.  I'll go ahead and lay that out right here and now.  I do, however, enjoy obtaining autographs of folks of historical significance.  I also enjoy making use of cards which I normally would have trouble finding a use for.  So, I was able to get the above 2013 Topps Flags of the World reprint of the United Nations flag signed by the former Ambassador to the UN, Nikki Haley.

I have no idea where I got this card.  It is still a mystery to me where it came from, but I ran across it in one of my boxes and pulled it because I thought it looked cool.  It turned out that it was a reprint of the 1950s Topps Flags of the World set.

Haley (b. 1972) was the Ambassador to the UN under former President Trump from 2017 to 2018.  Before that, she was the first female governor of South Carolina from 2011 to 2017.  A graduate of Clemson University, she was, at the time, the youngest governor in the US and the second of Indian descent.

That is an awesome piece. great idea sending it to her. So cool that she was quick to get it back to you.

Very cool addition to your collection.