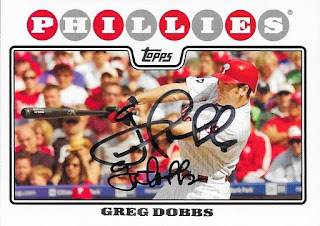 I got some nice cards back signd from Greg Dobbs recently.  The above 2008 Topps was a good choice, and turned out well.  This probably isn't Topps's best effort, but the design is clean, and I like how they did the team names in alternating bubbles at the top.  The border is pretty restrictive on the photo, though. 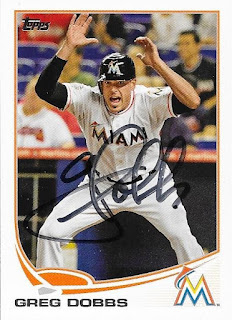 This is a 2013 Topps mini.  I like getting these signed and out of my box.  They were able to be had cheaply back then, and I bought a couple boxes to bust with my buddy, Andrew.  I got rid of most of the base cards, but still have a small handful in my 2013 Topps box. 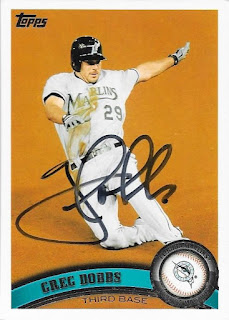 I really like this 2011 Topps update of Dobbs.  For some reason, I have always liked the infield dirt shown on cards.  This one just looks cool, and looks even better now that it is signed.

I mailed to Dobbs on November 16 and got the cards back on December 7, for a 21-day TAT.

He generally got good cards from Topps; the 2013 is one of my favorites. His 2014 Heritage is also unique. I need to fill out his player page of 9 cards some day.