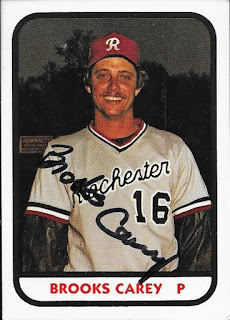 I got this card at the National a few years ago when I bought the 1981 TCMA Cal Ripken.  THe sell gave me this card as a throw in, and I have had it in my box for a long time.  I finally found an address for Carey and sent it on its way.

I mailed to Carey on August 27 and got the card back on December 15 for a 110-day TAT.  Carey also included a note apologizing for the delay.

Posted by William Regenthal at 9:48 PM