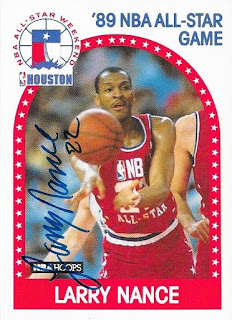 I was able to send TTM to a former basketball player that I actually knew personally years ago.  Larry Nance used to own a Pro Modified drag car that ran against my dad for years.  I got to know Larry at the race track, and he was always nice.  He has since stepped away from racing, but not before he, himself, raced for a few years.  When I saw he was signing TTM, I made sure to find a card that I could send.  I found this 1989 NBA Hoops All Star card, and sent it on its way.

I mailed to Nance on November 16 and got the card back signed on November 30, for a 14-day TAT.  I wrote him a full-page letter, and was hoping he would write back, but he didn't.  I'm sure he was busy, but it would have been cool if he had remembered me.

Posted by William Regenthal at 4:12 PM

Bummer that he didn't reply more personally. Did you interact with his son at all while you were racing?