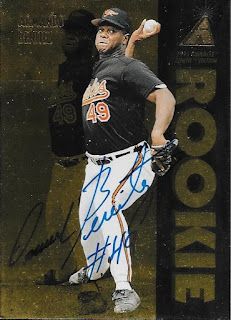 I saw a private signing come up that included two former Orioles, so I decided to send to it and add a couple tougher autographs to my album on some nice cards that had been stashed away in my Orioles box.  The above 1995 Pinnacle Zenith of Armando Benitez turned out really well.  I enjoy the mid-90s Zenith stuff, and they look great when signed.

Orioles fans likely won't forgive Benitez for blowing games in the playoffs, most notably when he allowed an 11th inning home run to Tony Fernandez, which ended the Orioles season in Game 6 of the 1997 ALCS.

I mailed to the signing on March 9 and got the card back signed on December 8, for a 274-day TAT.

Posted by William Regenthal at 11:58 AM