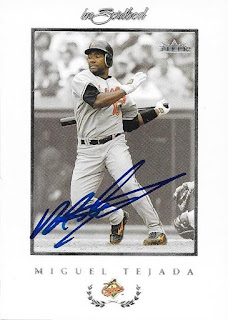 Here is the second of the two former Orioles I was able to get autographs of through a recent private signing.  I sent off this 2004 Fleer Inscribed to the signing, and it turned out really well.

Tejada's time in Baltimore was marred by the steroid suspension of Rafael Palmeiro, who blamed Tejada for a tainted B-12 shot.  He was traded to Houston the day before his name was revealed to be in the Mitchell Report.  Later on, while he was with the Astros, ESPN would reveal during an interview, in one of their worst "gotcha" moments, that Tejada had faked his birth year and was actually 2 years older than he had been reporting.  I watched the interview and felt really bad for him at the time.  I lost a lot of respect for ESPN after that because I feel like the guy was ambushed in the interview.

His signing was huge for the Orioles at the time, but he ended up being the best player on some bad teams.  They had a decent offense with Tejada, Brian Roberts, Melvin Mora and Jay Gibbons, but they didn't have any pitching.  I liked Tejada as an Oriole and I remember being elated that offseason when he was signed.

Tejada appeared on the Hall of Fame ballot 2019 but received only 1.2% of the vote.