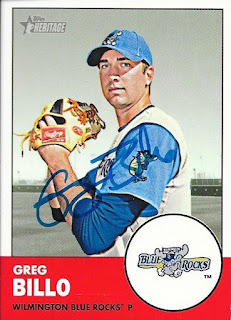 I was able to find an address for Greg Billo and get his 2012 Topps Heritage Minors card signed TTM.  I had a ton of 2012 Heritage Minors in one of the boxes that I got from my former LCS, so it was nice to be able to get one of them out and into my autograph album.