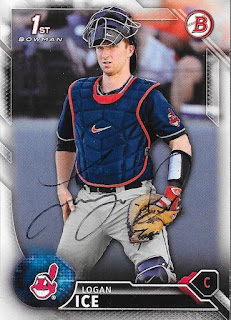 I had a bunch of Logan Ice cards put aside for minor league graphing, and I never got an opportunity to get him.  So, I finally sent a couple of the cards to him, and got this 2016 Bowman signed.  The signature is in ballpoint pen, but the card is still signed.

Posted by William Regenthal at 10:05 PM