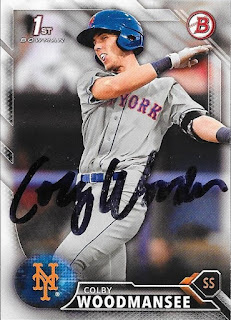 I got a 2016 Bowman out of my Bowman box when I found an address for Colby Woodmansee.  The card came back signed quickly.  I've gotten pretty good at finding working addresses.  I've had a few fails, but overall, my success rate has been pretty good.

I mailed to Woodmansee on October 26 and got the card back signed on December 11, for a 45-day TAT.

Posted by William Regenthal at 8:56 PM