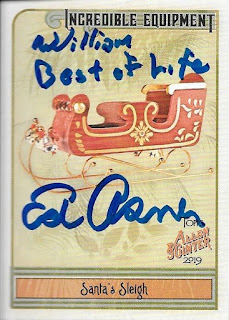 One of the cooler non-sports autographs that I've gotten back recently was from Ed Asner.  I had the above 2019 Allen & Ginter Incredible Equipment card of Santa's Sleigh, and thought it would be cool to get it signed.  I sent it to Asner because he played Santa in the movie, Elf.  The card looks really cool, and will be an interesting addition to my album. 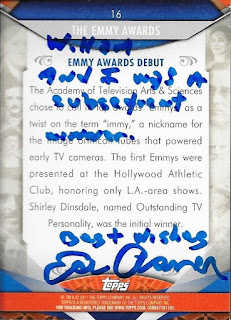 I also had Asner sign this 2011 Topps American Pie Debut of the Emmys card.  He signed the back of it and explained that he won subsequent Emmys, which was really cool.

Asner (b. 1929) is the most honored male performer in Primetime Emmy history, having won 7 Emmys.  He appeared on the Mary Tyler Moore Show, and countless other TV shows in the past.  He is also known for appearing in the movies, El Dorado, Elf, Up and TV mini-series, Roots and Rich Man Poor Man.

Posted by William Regenthal at 7:40 AM

Awesome to get his auto on the Santa's Sleigh card!

Do you really think he signed it?