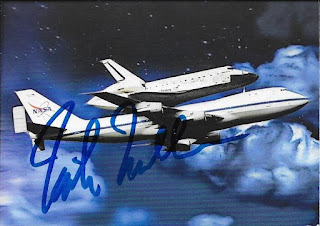 I was able to get another of these really cool 2019 Allen & Ginter History of Flight cards signed.  This one was signed by former astronaut, Mike Mullane.  I picked Mullane, since the space shuttle Discovery is depicted on the card.

Mullane (b. 1945) became an astronaut in 1979 and flew on three space shuttle missions.  His first mission, on August 30, 1984, was the first voyage of space shuttle Discovery.  During that mission, Discovery orbited the Earth 96 times over 145 hours before landing in California on September 5, 1985.  Mullane flew on two missions aboard space shuttle Atlantis, in December 1988 and February 1990.

I mailed to Mullane on November 16 and got the card back signed on November 24, for a 12-day TAT.

Posted by William Regenthal at 6:11 PM