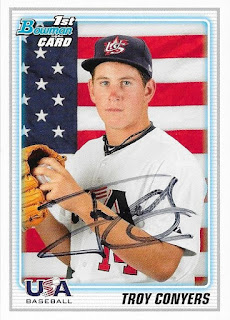 I added another of the 2010 Bowman USA cards to my album with this TTM success from Troy Conyers.  The Sharpie was dying, but the card is signed.  I am missing maybe 4 or 5 of the guys in the set, which is closer to completion than I ever thought it would be.  I picked up the cards during the 2012 National in Baltimore at the suggestion of my friend, Ryan.

Posted by William Regenthal at 5:58 PM