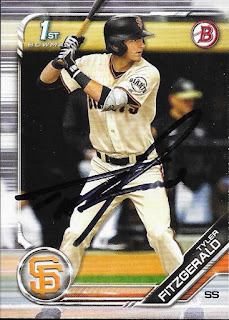 More and more Bowmans have come back TTM, which has been nice, since I have a ton of them to send.  This Tyler Fitzgerald 2019 Bowman Draft bubbled the signature just a bit, but the card still looks ok.

I mailed to Fitzgerald on November 17 and got the card back on December 3, for a 16-day TAT.