I got these late 90s prospect cards out of one of the boxes I got from my LCS a while back.  The above 98 Stadium Club that I got back TTM from Aaron Akin turned out pretty well.  I like the look of the card; it is tough to see from the scan but there are some embossed ball laces on the card, which makes it kind of cool. 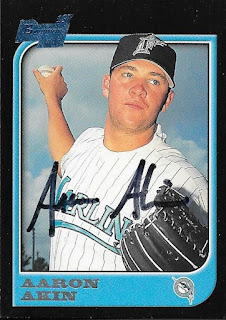 I also got this 1998 Bowman signed by Akin.  I've got a bunch of late 90s Bowmans now, and it is kind of interesting to look back at some of the former prospects who weren't able to crack the majors.

Akin (b. 1977) was a first round pick (12th overall) by the Marlins in the 1997 June Amateur Draft out of Cowley County Community College.  It sounds like an obscure community college, but they boast former players like Trevor Rosenthal, Travis Hafner and Junior Spivey.

I mailed to Akin on November 18 and got the cards back on December 2, for a 14-day TAT.