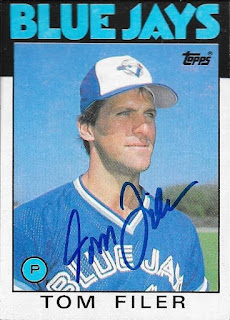 I had a ton of Tom Filer cards, and finally got around to mailing to him to get a few of them signed.  I picked Topps stuff, as usual, since I like getting those signed the most.

I mailed to Filer on September 16 and got the cards back on December 15, for a 90-day TAT.

Posted by William Regenthal at 8:17 PM