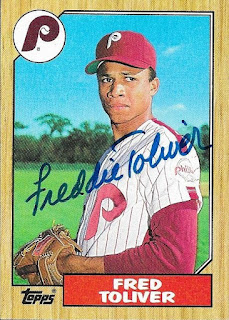 I added a tougher card to my 87 set when I found this Fred Toliver signed card on Ebay.  The card looks great.  I had tried to send to him, but he hasn't signed since 2007 and I'm not certain his Harvey address is correct.  Regardless, I have the card now and can cross it off of my list.