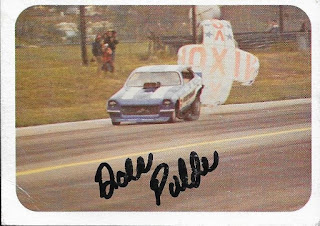 This TTM success took some patience.  I got this card, which is a 1973 Fleer AHRA drag racing card that I got from the old card shop in Winston-Salem out of a shoe box of cards that someone brought in to sell.  I held onto the cards (there were a handful of these 1973 Fleer) for a while until Chris was old enough to handle them, and gave the cards to him.
Fast forward several years, we were looking through one of the albums and I found this card.  I realized it was Dale Pulde, who I really liked when I was younger because he had one of the best looking funny cars of all time, the Miller High Life Warrior.  I wish they had cards of that one, because I'd have sent that off.
Still, I thought this one was cool and would be a cool addition to my album.  I was unable to find his address, so I messaged his Facebook page and waited.  I finally got a response a few months later saying where I could send the card, and I sent it along.  It looks really cool now that it is signed, and I was super glad to get it completed.

Pulde has six career NHRA national event wins and was IHRA Champion three times.  It is pretty tough finding bio information on him, but I recommend a google search of his War Eagle and Miller High Life Warrior Funny Cars.  They were awesome paint jobs back in the day.

Posted by William Regenthal at 10:47 PM

Wow, 2 months to get a response in a Facebook group?