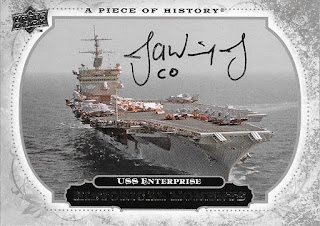 I have been trying to get some of my non-baseball cards out of my boxes and find a way to get them signed.  I've been pretty successful on a few of them.  A lot of them require being creative and finding a way to tie the card into the person signing it.  The above 2008 Upper Deck Piece of History was actually an easy one to figure out.  I went with finding a former commanding officer of the USS Enterprise and sent it off to James Winnefeld, Jr.

Winnefeld (b. 1956) is a retired US Navy Admiral who was the 17th commanding officer of the USS Enterprise.  He led Enterprise on her 18th deployment which included combat in Afghanistan immediately following the September 11, 2001 attacks.  Winnefeld was the recipient of 3 Defense Distinguished Service Medals,  Navy Distinguished Service Medal, Defense Superior Service Medal, Legion of Merit (twice), Bronze Star Medal and a Canadian Meritous Service Cross.

I mailed to Winnefeld on November 16 and got the card back on December 18, for a 32-day TAT.

Posted by William Regenthal at 9:04 PM

This one is awesome!