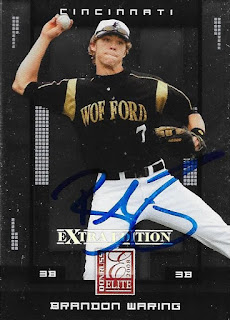 It's really nice to see a card showing a Wofford uniform.  My younger brother, Adam, is a Wofford Alum and he and I have talked about Brandon Waring in the past.  When Waring went to the Orioles, it was Adam who let me know that Waring had formerly played at Wofford.  When I saw Waring at a minor league game, I got a ball signed for Adam (back when I thought the Wal Mart balls would hold a signature).  The ball had since faded, but I was able to get one of the above 2008 Donruss Elite Extra Edition card signed for him.  I'm sure with it having the Wofford uniform on it made it that much better. 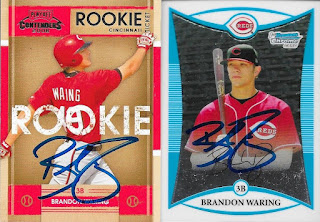 I had held onto Waring's cards for a long time, hoping that I would be able to find a working address and try to get him to sign TTM.  I finally found an address, and was able to get my cards signed.

On December 9, 2008, the Reds traded Waring, Ryan Freel and Justin Turner to the Orioles in exchange for Ramon Hernandez.  Kind of interesting that Turned ended up becoming a pretty big star.  Freel's story is really sad and is something to be discussed another day.

I mailed to Waring on September 22 and got the cards back on December 17, for an 86-day TAT.

Posted by William Regenthal at 8:00 PM