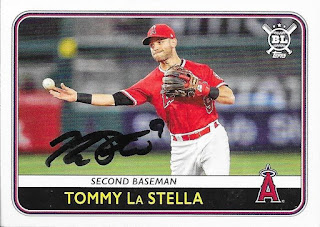 It's always nice to get some cards signed by players who are currently active, especially since access to graphing at games has been suspended over the past year.  I feel like more and more players have signed TTM the past year since fans haven't been allowed in ballparks, but I could be wrong.  Tommy La Stella is a fairly regular signer, and I was able to get a few nice cards signed and into my album.
The above 2020 Topps Big League was a good card for me to choose.  The landscape layout and clean border make the card look sharp when signed.

I mailed to La Stella on July 2 via Angels Stadium and got the cards back signed on December 18, for a 169-day TAT.

Posted by William Regenthal at 5:49 PM