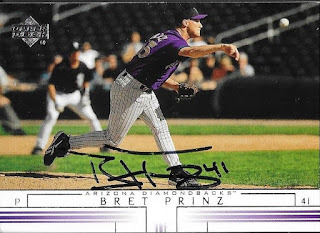 I got a couple nice early 2000s cards signed by Bret Prinz which included the above 2002 Upper Deck.  I really liked this set, and at one point, had a bunch of them.  I think I let a lot of them go at shows, but a few remain in my boxes.  This one turned out really well. 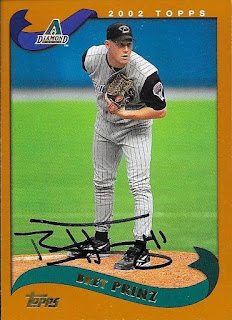 This 2002 Topps also turned out well.  I have a bunch of these now that I took an almost complete set from my former card shop.  They took out the Mauer rookie and gave me the rest of the cards; this kept them from tossing the rest in the trash.

I mailed to Prinz on November 30 and got the cards back on January 5, for a 36-day TAT.

Posted by William Regenthal at 9:56 PM