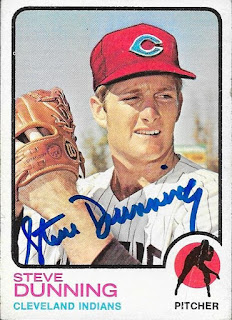 I added another 1973 Topps card to my album when I got this TTM success back from Steve Dunning.  His signature looks great on this card, but the card itself was damaged in transit.  It'll straighten up after spending time in my album.

Posted by William Regenthal at 10:08 PM