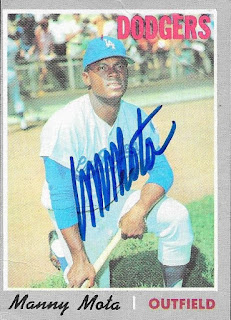 I saw that Manny Mota signed TTM, so I grabbed several of his cards and got them mailed out.  He has a pretty cool signature.  I was surprised I had the extra 1970 Topps; I have only a handful of loose 70 Topps in my boxes, and most were of people who don't sign.  It has been a while since I have added one of them to my autograph album.