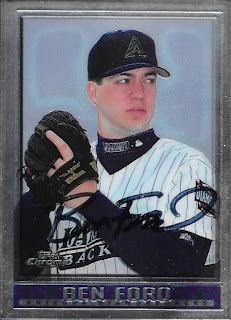 Two of these Ben Ford cards came out of the cheap 5,000-count boxes I picked up from my LCS.  The only one that was mine was the 1998 Topps shown below (below, left).  I happened to look to see if he signed, and saw that he did, so I pulled the two I saw in the card shop boxes, and then pulled the 1998 from my stash of Topps cards.
The above 1998 Chrome must have been sitting in these boxes for a long time, as the cards had to be peeled apart, and they seemingly don't need prepping.  I think whatever UV coating Topps used then was pretty bad, and was susceptible to melting and sticking to other cards.  I hate it.  Still, the card looks ok, but a lot of the cards from those boxes look kind of cloudy, especially when I prep them with powder, so I sent off a few last week unprepped, just to see what happens. 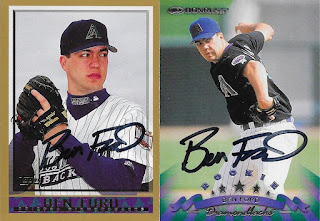 Posted by William Regenthal at 11:12 AM