Another TTM Success From Alejandro Pena 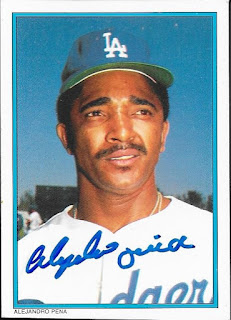 I sent off a few more Alejandro Pena cards TTM because they had been sitting in a pile on my desk after I had gotten him to sign my 1987 Topps card and I realized he signed for a fee.  I would have sent more initially, but he only signed the 87, which was good.  I decided later on to go ahead and pay his (very minimal) fee and get a few more in my album.  The above 1985 Topps Glossy All Star set card was one that I knew would look awesome when signed.  It definitely does. 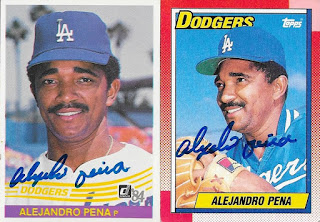 I hardly have any 1984 Donruss, so I wanted to get the one I had of Pena signed (above, left), and I threw in a 1990 Topps to round out the submission.  All of the cards I sent turned out great.  I took the rest of the cards I had of Pena and sent them out to some friends so they, too, could send to him.