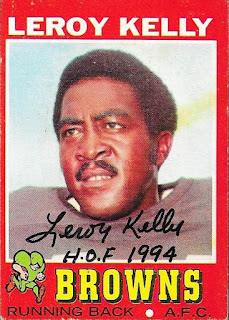 It has been a while since I have added a football player to my autograph album.  I like to add those when I find some cool vintage cards, and that's what happened with Leroy Kelly.  I had picked up a couple 5,000-count boxes from my LCS for real cheap, and there was a small assortment of vintage baseball and football in there.  I saw that there were a few Kelly cards, and that he signed TTM for a fee, so I got the money together, and sent the cards off.
Kelly has a great signature, and inscribed each card with "19 H.O.F. 94", which looks really cool.  I especially like the red border on the above 1971 Topps.  I have always said that red cards tend to look great when scanned. 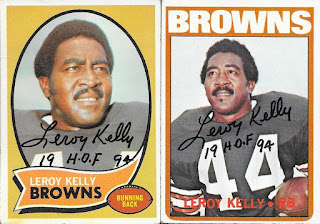 I also had a 1970 and 1972 card of Kelly, so I sent those along, as well.  I figured I would go ahead and pay the fee to get them signed, otherwise, they'd just sit in my boxes, because I do nothing with football stuff.

Kelly won the NFL Championship in 1964; he was a 6-time Pro Bowler and a 3-time All Pro.  As his inscriptions say, he was elected to the Pro Football Hall of Fame in 1994.