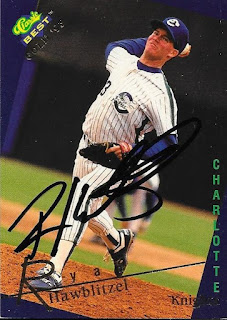 I got some early 90s cards signed by Ryan Hawblitzel.  The above 1993 Classic Best is a card I found in one of the cheap boxes I picked up from my LCS.  These cards look really nice when signed. 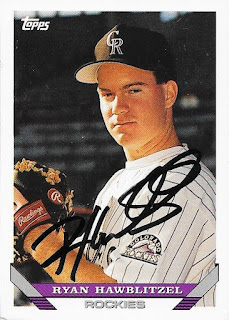 I also found this 1993 Topps in my boxes and sent it off to be signed.  It also turned out well.  The Rockies cards in 1993 Topps don't stand out as much as the Marlins cards do, but they still are good to get signed.

I mailed to Hawblitzel on August 11 and got the cards back on August 27, for a 16-day TAT.

Posted by William Regenthal at 6:57 PM