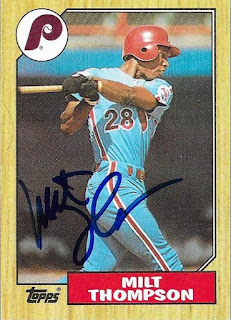 It had been a while since I had heard from my buddy, Stefan.  He messaged me recently saying that he had picked up some more signed 87 Topps, and saw that I needed Milt Thompson.  So, for $3, he hooked me up.  I had sent TTM to Thompson, but it hasn't come back.  I figured 3 bucks would be fine for knocking the card off of my list.

Thank you for the quick and easy deal, Stefan!

Posted by William Regenthal at 1:06 PM