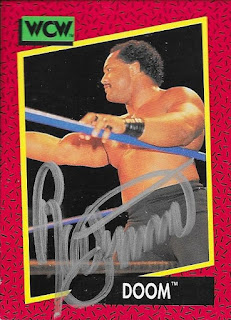 Chris gave me the card but I wanted to make sure I got Ron Simmons's autograph while he was signing ttm. He has long been a favorite wrestler of mine and is a college football legend.

Simmons (b. 1958) is a retired former WWE wrestler and former college football player (Florida State). He began wrestling in 1986 and retired in 2010.

Simmons was a former one-time WCW World Heavyweight Champion and is recognized by WWE as the first African American to hold a major World title. He was inducted into the WWE Hall of Fame in 2012. He played professional football for the Cleveland Browns in 1981 as part of the practice squad only.

Posted by William Regenthal at 6:56 PM