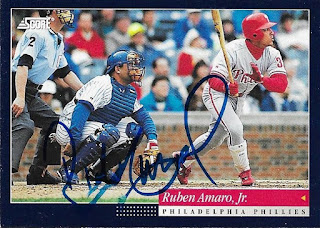 I got some more junk wax era cards out of my box and into my album with this TTM success from former Phillies GM, Ruben Amaro, Jr.   I had a bunch of his cards, so I was glad to be able to get a few signed, and then send some off to some friends, so they too could get a few done. 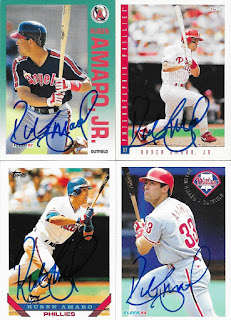 Surprisingly, I don't have a whole lot of 1992 Fleer (top left).  Those must not have survived the great card purge I did a few years ago.  I had taken a buch of junk wax cards and made gift bags that I gave out for Halloween.  Now, I kind of wish I had kept some of those, because I wasn't doing TTM back then.