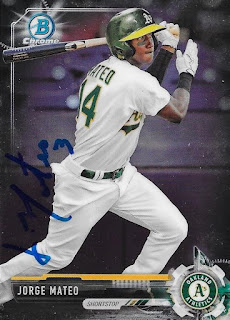 I had a bunch of Jorge Mateo cards that fell into my box of shame, as I had sent them to someone who was going to try to get him in person in 2019.  They didn't get him, and I didn't want to put the cards back in my boxes, so that was a big reason the box of shame was created.  Later on, my friend, Jackson, did a private signing with Mateo.  I was able to get at least one card out of the box, get it signed, and get it into my album.  The card is a 2017 Bowman Chrome, and it turned out pretty well.

I mailed to the signing on July 6 and got the card back signed on August 18, for a 43-day TAT.

Posted by William Regenthal at 2:49 PM