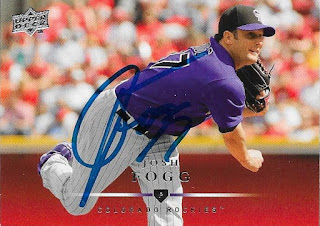 Here are some mid-2000s cards that I was able to get signed TTM when I sent to Josh Fogg.  The above 2008 Upper Deck turned out really well.  These cards look great when signed, and I have a ton of them still.  I just always have that box buried, and don't get into it often.  When I do, though, I'm glad to get some of the cards signed.

Posted by William Regenthal at 1:37 PM