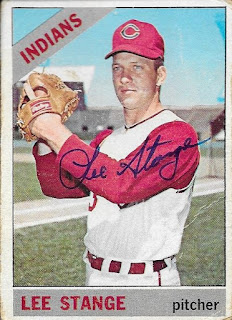 I recently went to my LCS and looked through their vintage box for a few guys to send TTM.  I was able to add a couple nice cards with this success from Lee Stange.  I don't have many 1966 Topps in the album, and I like this one showing the Indians uniform of those times.  I typed Reds, then looked at the team name on the card.  That C on the hat tricked me. 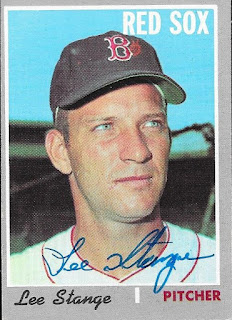 I also added this 1970 Topps.  This might be one of the worst Topps designs, with the drab gray border and all, but I like the set.  It was a nice set to build and has many Seattle Pilots  in it, which has been a fun subject to send out for TTM.  That doesn't have much to do with Stange, but still, a moment of merit for a much maligned set.

I mailed to Stange on October 16 and got the cards back on October 23, for a 7-day TAT.
Posted by William Regenthal at 5:28 PM