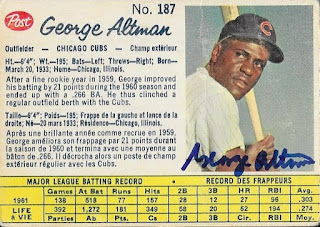 I look back on this TTM success from George Altman and regret the fact that I didn't include a photo taken of he and I together from when we met him a couple years ago in Goldsboro.  I saw that he signed TTM, and picked up some of his cards from the recent card show in Greenville.  One of the cards is one I had already.

I picked up the above 1962 Post Canadian from the show and didn't think much of it at the time, other than it would be a little something different in my album.  For a dollar, it wasn't a bad pickup, but when I got the card back signed from Altman, I realized that it was the Canadian version.  Now, it definitely was something different for the album. 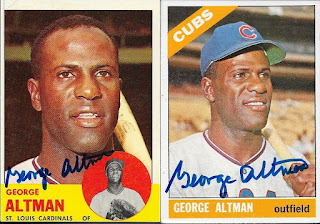 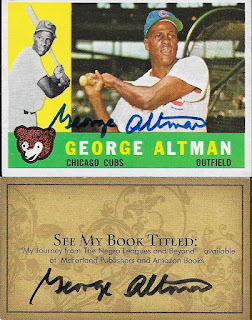 I also had picked up a 1960 Topps at the show and sent it along.  It is a nice card, as well.  Altman also included a signed business card for his book, which I plan on checking out soon.

I mailed to Altman on October 30 and got the cards back on November 13, for a 14-day TAT.
Posted by William Regenthal at 5:08 PM