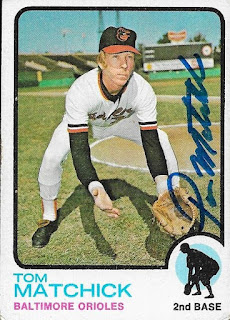 I picked up a few 1973 and 1974 Topps for TTMs the last time I was in Columbia.  The antique shop is now closed, so I had to meet Conrad at his storage building, but I was still able to come away with some nice stuff.

One of the cards I picked up was this 1973 Topps of Tom Matchick.  I saw that he was an Oriole, and that he signed TTM, so I figured I would give it a shot.  It took a while, but the card finally came in.

Matchick's time as an Oriole was brief.  He was acquired from the Brewers in a trade in October of 1971 for Mike Ferraro and a minor leaguer.  He played only 3 games with the Orioles in 1972, then was traded to the Yankees in April 1973 for Frank Baker.