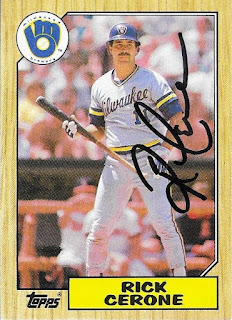 Here is another 1987 Topps that I was able to get signed.  Rick Cerone is one-per when it comes to signing TTM, so I made sure that the 1987 that I had was the one I sent along.  The card turned out really nicely.

I mailed to Cerone on November 6 and got the card back on November 17, for an 11-day TAT.
Posted by William Regenthal at 6:40 PM