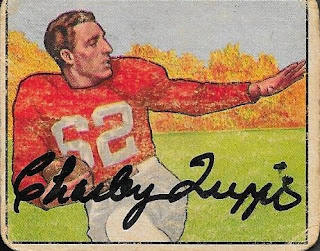 I was bored one day and thought I would look up some older football players who sign TTM.  I wanted to add some old Topps and Bowman football cards to my album, since I thought those old cards looked really cool.

I bought 8 cards featuring 6 players and sent them all out a couple weeks ago.  The first one to come back was Pro Football Hall of Famer, Charley Trippi.  This is a 1950 Bowman, and shows him as a Chicago Cardinal.  That's right, at one point, there were two teams in Chicago.  I don't really follow football, so I had no idea that the Cardinals were in Chicago.  I did remember when they were in St. Louis and moved to Arizona.

Trippi attended the University of Georgia from 1942 to 1946, where he led the Bulldogs to a Rose Bowl Championship in 1943.  He was also that game's MVP.  He missed the 1944 season while serving in the military in World War II.  He was the first overall pick in the 1945 NFL draft.  When he retired from the NFL, he had compiled the most total yards of offense by any player in NFL history.

For my first of the vintage football cards to come back, I sure hit on a winner!
Posted by William Regenthal at 10:24 AM